There is little else in life without compassion beyond divides.

This picture was e-mailed to me by a dear friend.

Notice the facial expressions and body language of each of these 4 individuals seen in the picture. Try to guess what could be the story, before you read the context. 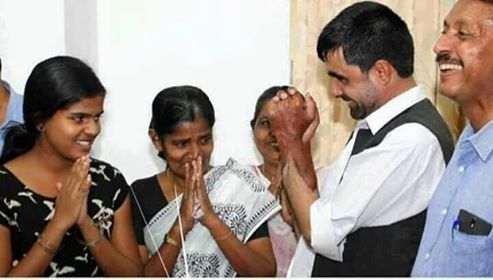 The email said: “Abdul Raheem, an Afghan soldier who lost both his hands in war, received a pair of hands from Joseph of Kerala who had suffered brain death. Joseph’s wife and daughter are looking at the hands that once caressed them. The transplant surgery was performed by Dr Subramanian Iyer (blue shirt) of the Amrita Hospital, Kerala.
A Hindu doctor – a Christian organ-donor – a Muslim recipient. This is ‪#‎humanity‬.”

“We do not need guns and bombs to bring peace, we need love and compassion.”
― Mother Teresa

Longest Night ~ solidarity with the homeless

A cold, wet, February night in Canada for ‪#‎LongestNightPeel‬  made me appreciate what ‪#‎homelessness‬ means and what the homeless go through, physically and emotionally, every day, every night.
Sleeping in the car, there was loneliness, it was cold, it was wet, there was limited space, there were lights flashing from outside and passers by were peeping in. And it might as well have been dangerous too if we did not have 5 cars parked next to each other.

We  are blessed we all had warm homes awaiting us, loved ones praying for us, friends sending text messages for strength and family eager for us to come back safe in the morning.

Lone homeless humans who sleep in cars or huddle in sleeping bags in public spaces, on pavements don’t have that luxury of accompanied cars for company or for safety. And they are pushed from parking lot to parking lot by security guards as it is against the bylaws  to park your car after hours  or to sleep in public places.
They don’t even have loved ones praying for them or concerned for them, and there are no warm human arms or hearts or beds to return to.

As I lay there, the clocks slowed down, giving an endless opportunity  to ponder on the mysteries of creation, on how equal opportunities remains just  a good idea and the burning question on why Father Fortune favors some and not  some others?  It brought home the power of phrases, “to be in others shoes” and “how blessed we are”.

It was an experience of a life time. Now, every day as I will sleep in the warmth of my bed, it will have a different meaning. Gandhi’s words,“Poverty is the worst form of violence.”  will haunt even more.

Thanks to United Way of Peel Region family that gave me this opportunity to experience what is hard to imagine otherwise.

With more power to the kind hearts who strive beyond petty divides of borders, beliefs, skin color, ethnicity etc for a just, safe and inclusive world, I salute you all.
❤

Some hard stats on poverty and homelessness in Peel:

There is acute shortage of shelters for the homeless in Peel Region, Ontario, Canada. 450 youth are refused a bed each year. In order to raise awareness against homelessness, to ask for more government support to shelters, to push for policies  that alleviate poverty,  develop affordable housing and to raise funds to support programs for the homeless, United Way of Peel Region organized  #LongestNightPeel Initiative. Sixty community members slept in their cars on February 19, 2016 and have so far raised over $51,000, while the funds are still being collected.
Peel Community is compassionate and generous, they heard our appeal.
With yet another step towards a diverse yet inclusive Peel…

I end with a quote from Gandhi:
“Whenever you are in doubt or when the self becomes too much with you, try the following experiment: Recall the face of the poorest and most helpless person you have ever seen and ask yourself if the step you contemplate is going to be for any use to him or to her … Then you will find your doubts and your self melting away.” 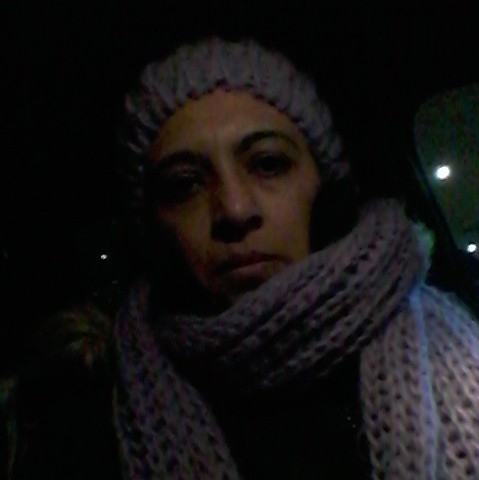 When I am overcome with weakness: Poetry by Najat Abdul Samad (War Art-4)


When I am overcome with weakness,

I bandage my heart with a woman’s patience in adversity.
I bandage it with the upright posture of a Syrian woman who is not bent by bereavement, poverty, or displacement as she rises from the banquets of death and carries on shepherding life’s rituals.
She prepares for a creeping, ravenous winter and gathers the heavy firewood branches, stick by stick from the frigid wilderness.
She does not cut a tree, does not steal, does not surrender her soul to weariness, does not ask anyone’s charity, does not fold with the load, and does not yield midway.

I bandage my heart with the determination of that boy they hit with an electric stick on his only kidney until he urinated blood. Yet he returned and walked in the next demonstration.

I bandage it with the steadiness of a child’s steps in the snow of a refugee camp, a child wearing a small black shoe on one foot and a large blue sandal on the other, wandering off and singing to butterflies flying in the sunny skies, butterflies and skies seen only by his eyes.

I bandage it with December’s frozen tree roots, trees that have sworn to blossom in March or April.

I bandage it with the voice of reason that was not affected by a proximate desolation.

I bandage it with veins whose warm blood has not yet been spilled on the surface of our sacred soil.

I bandage it with what was entrusted by our martyrs, with the conscience of the living, and with the image of a beautiful homeland envisioned by the eyes of the poor.

I bandage it with the outcry: “Death and not humiliation.”

A 75 year old Syrian Christian lady from Hama, works with my friend’s home as a cook. Apart from the fact that she makes amazing Syrian food, my  friend has employed her to support her financially. Not sure how she came here(as I have not interrogated her), but I know my friend worked hard to get her husband from Syria. The old man was served two deportation orders failing to obtain asylum until about six months ago, the Canadians accepted his application after he was diagnosed with lung cancer. The gentleman is going through treatment now here in Canada.

My friend is also working to get her widowed daughter, with two sons 21 and 22 years old who are stuck in Syria. Her daughter’s husband had died in Syria 3 years ago from some medical ailment, failing to get treatment. My friend is working through a nearby mosque she attends to raise funds to call the family as privately sponsored refugees.

Each time I meet her and inquire about her daughter and sons, she has only sad stories to share, of their struggle back home. According to her is no employment, no school and no medical care available where they live currently.

The dedication with which she cooks in my friends house is touching, knowing how hard it is for her own close kin back home.

In my endeavor to look for how Syrians at home and abroad are coping with the conflict, I have been referred to some very creative Syrians who are expressing their pain and agony through various artforms. This only bears witness to the amazing intellect in the Syrian nation, caught in a filthy regional hegemony war.

In his words: “I love dust and stones from.Syria. My message is a humanitarian message.” 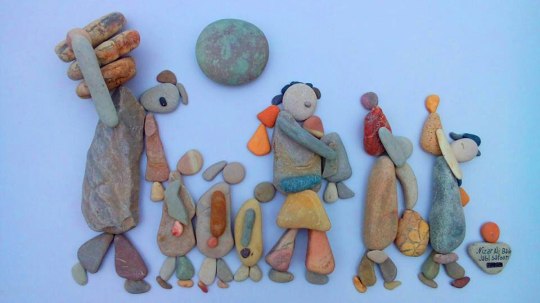 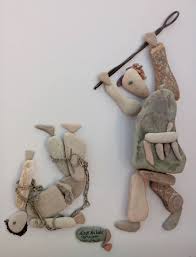 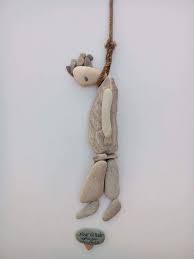 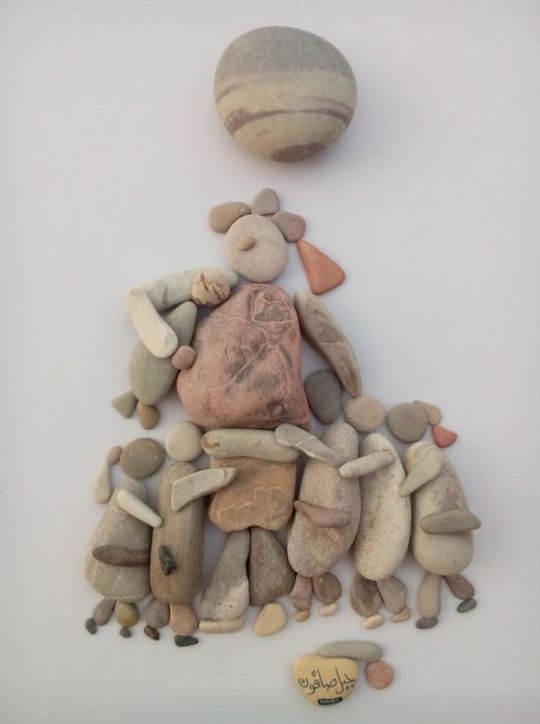 Some of his works that portray peace and love are also extremely pleasing.

They say miracles do happen and stones do speak. May these powerful stony expressions somehow turn into prayers for peace in Syria.
Amen.


Last week we welcomed in an event three Syrian families who had barely arrived 48 hours ago. Their weather beaten faces were all glowing with smiles.
I asked a 7 year old girl, “What do you like best in Canada?”
She replied with the widest possible grin, “The warmth.”
I thought she meant the hospitality.
Her mom explained with a twinkle in her eyes, “We were living in tents for 2 years. She grew up not knowing that in extreme cold there can be clothes thick enough and home warm enough to avoid cold weather.”
I hugged the mom tight.

Below are a few mind blowing illustrations of Syrian Kurds  by Molly Crabapple, a medical illustrator by proffession. Molly had gone to work with Doctors Without Borders in a Kurdish Syrian Refugee Camp. She illustrated not only their images but also their dreams and fears in words.

Every piece is like reading a novel, that touches somewhere deep. Kindly take time to read the small print too. 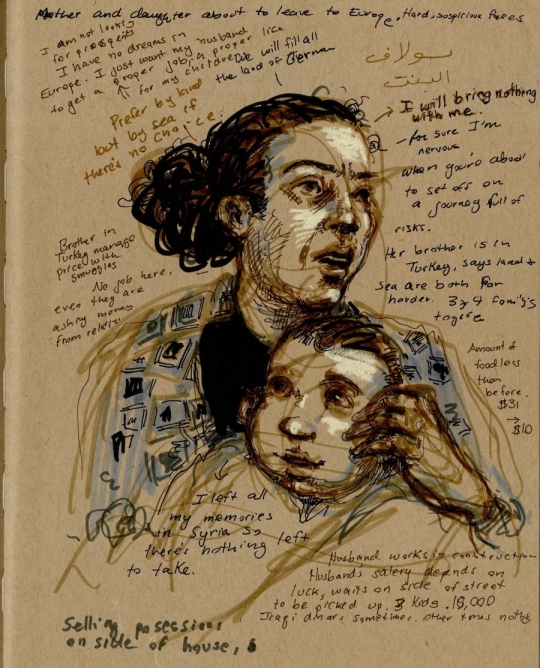 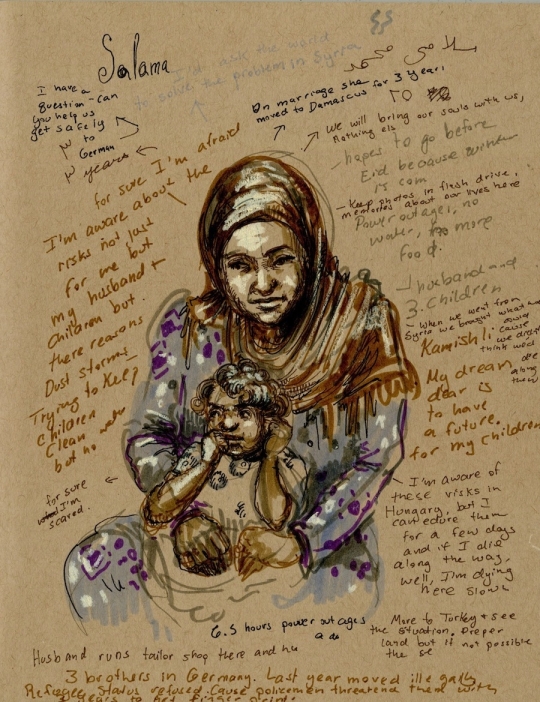 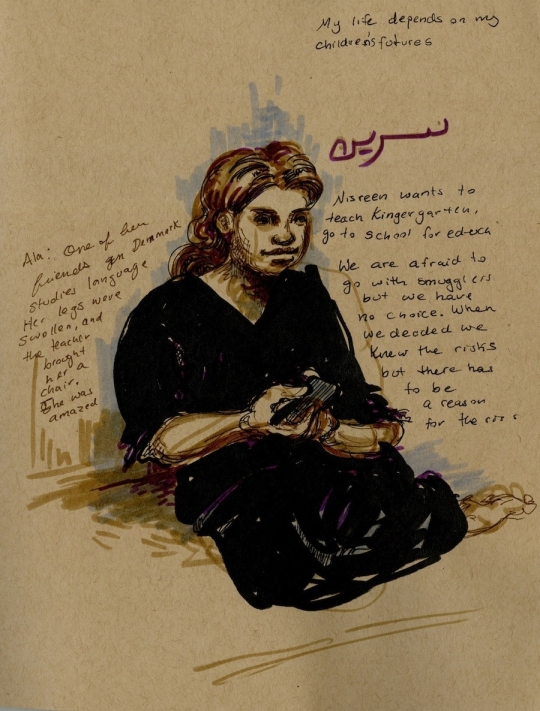 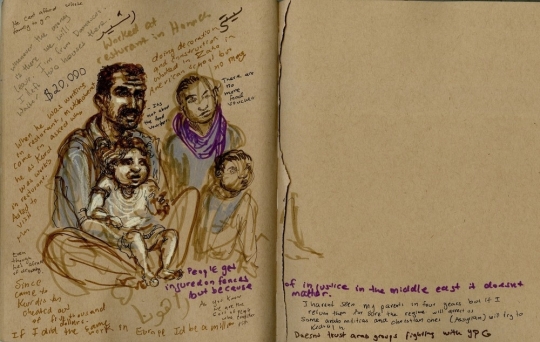 For past 5 years, I thought we had been a brave family to have immigrated to far away Canada. We came with a comfort of enough preparation in spirit and in kind.

Never in my mind did I imagine I would be working closely in different capacities for refugees from Syria. The experience of meeting and getting to know some of them has been an incredibly humbling experience.

Refugee was only a word we had often heard and thought understood it’s meaning very well. Knowing its implications, and associating names and faces to this word has been an experience that struggles to find adequate expressions in words.

May Canada and we Canadians be a source of peace and warmth to these new Canadians and all those that arrive in weeks from now.

Syrian war is a shame of our times.

This war had reset the standards of barbarism. Almost all kinds of war weapons have been used from both sides- brutal killings, burning the victims, rapes, hunger, seige and you name it.

I have personally talked to Syrian Refugees Muslims, Christians and Kurds, arriving here, and they speak of Assad and ISIS as the #SAMESHIT. Not one said they were happy with Assad.

As I post the  Channel 4 News Video on Homs, Syria,  a friend comments:
“This level of barbarity should not be possible in today’s day age. Yet, looking at the complete destruction of this city leaves me speechless !”

The images remind me of an artwork from Syria that had gone viral a few years ago. I hunt and hunt and finally dig out a treasure to my amazement.

It was first  of a series  work by Syrian artist Tammam Azzam, who studied fine arts from University of Damascus. Azzam used the devastating, war ravaged images from Syria and superimposed renowned master pieces of the art to send a polite message to the world.

His first piece “Freedom Graffiti” in which he used The Kiss by Gustav Karl was the piece that went viral in February 2013.

The other images in the series, by the same artist are equally mindblowing: 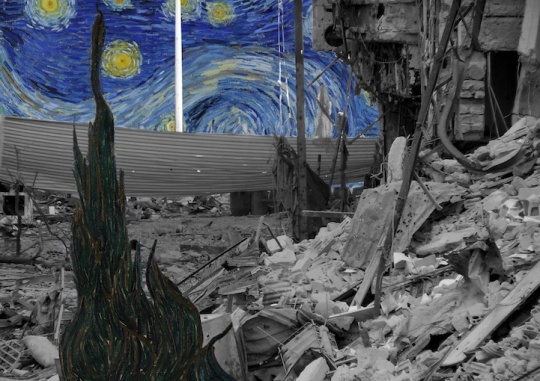 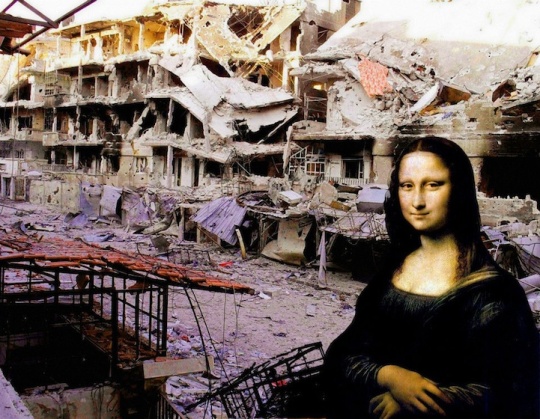 Finally he sends an affectionate message to the world powers especially those engaged in Geneva Talks, which obviously has fallen on deaf ears so far.

As the brutal world powers wrangle and wrestle over the fate of his people, failing to agree for peace, Tammam Azzam and many other artists try to touch the conscience of international community, to pay heed that the Syrian plight.

More such series of other art works and artforms from Syria will follow in subsequent blogs.

May the art work heal us all. May peace be with us all.