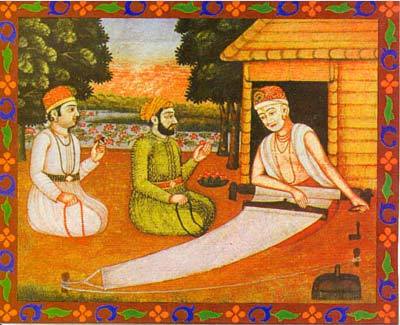 Almost 700 years ago, when religious polarisation in the Indian subcontinent was at its helm, a preacher was born. He was named Kabir and he spent the rest of life trying to bind Hindus and Muslims together. Today, as religious hatred is bred into masses and intolerance is injected into young minds one finds it necessary to bring forth Kabir, the champion of religious tolerance and interfaith harmony.

The mystics from united India are more relevant to us than Persian or Turkish voices as they spring from the culture we own. For a relatively more radicalized society in Pakistan, these pluralistic and tolerant voices need to be disseminated vehemently. These great men seemed to be far ahead of their times and Kabir is no exception. Kabir stands tall, in the line of greatest mystics of all time with St. Augustine, Ruysbroeck, Buddha, Rumi, Emre and Hallaj

Kabir’s vision, though timeless in its essence when transformed into simple poetry addresses the basic problems humanity faces today. His message was simple and straightforward — that God is perceived in different forms by different people, but in essence they all talk of One supreme power.

(Some call him Ram, some name him Khuda)

His honest message offended both Mullahs and Purohits for it challenged their stakes. He was persecuted by both to which he screamed:

(O gentleman, see the world has got mad / I say truth but they run to beat me and believe the fake.)

His intent was not to offend anyone and he made it clear:

(Kabira Stands in the market place( the world) / Asks for everyone’s prosperity. Neither special friendship nor enmity for anyone).

His mission, through his vision was to promote brotherhood, unity, love and forgiveness beyond regions and religions.

The Hindu says Ram is beloved, the Muslim says Rahim / They fight and kill each other, no one gets the point.

And the point that no one got was:

Maatii Aik Anaik Bhaanth Ker Saaji Sajan Haray
(The Clay Is The Same, But The Designer Has Designed It In Various Ways)

Kabir through his words challenged the authority our society has given to clerics quite audaciously:

The spiritual athlete often changes the color of his clothes
& his mind remains gray and loveless.
Or he drills holes in his ears, his beard grows enormous
People mistake him for a goat.
He shaves his skull & puts his robe in an orange vat,
Reads the Book & becomes a terrific talker.
Kabir says: the truth is, you are riding in a hearse to the country of
death, bound hand & foot.

He even warned against the mindless following of religious preachers and to use one’s own conscience to decide what is right or wrong:

Jaka guru hai andhla, chela hai ja chandh / Andhe andha theliya, dunyu koop parent
(If the preacher is blind (unrealized) and the disciple is also blind, how can they progress further? If a blind shows the path to the other blind, they both are bound to fall in some dead well at some time).

To those bigoted who would not understand this, he remarked:

Phootee aankh vivek kee, lakhe na sant asant
(People have their inner eyes of conscience blind; they don’t see who is real and who is fake)

“What can one do, if, with lamp in hand, one falls in the well”

(I went on the search for the Bad Guy, Bad Guy I couldn’t find. / When I searched my mind, Non one is Nastier then Me)

He lived to restore the confidence in the common man against the elite clergy or the rulers, who claimed their superiority by virtue of their status. He explained:

(If You are Big so what? Just like a date tree / No shade for travelers, fruit is hard to reach).

He used simple vernacular language, with metaphors from common examples to engage the people around him. People were fascinated by the deep moral messages contained in his simple poetry.

(Kabi , Don’t be so proud and vain, Looking at your high mansion / Tomorow you’ll lie under feet, On top will grow Grass).

(When you came in to this world, Everyone laughed while you cried / Don’t do such work, That they laugh when you are gone)

And that it’s not one’s status but one’s deeds which pay off ultimately:

(Both the preacher and the follower are together / but both will be dealt according to their deeds.).

The Purohits and Mullahs could not tolerate his audacity, and how he influenced the common man. His words had already penetrated into masses and exposed the self-righteous claims of every clergy. He got expelled from Kashi. He roamed around Benaras preaching his message and passed away in Maghar.

After his death both the Hindus and the Muslims both claimed ownership over him. There are a few legends but one wonders how was the matter resolved. As for now, there exists a Hindu shrine and a Muslim Dargah adjacent to each other at the place where he died.

Kabir’s words are very pertinent to current Pakistan, where religion is manipulated for political ends and justify acts of violence. Voice of Kabir needs to be resonated in our academia and society being the need of time. Why did not we own Kabir like India? – I leave this question to be answered by the reader.